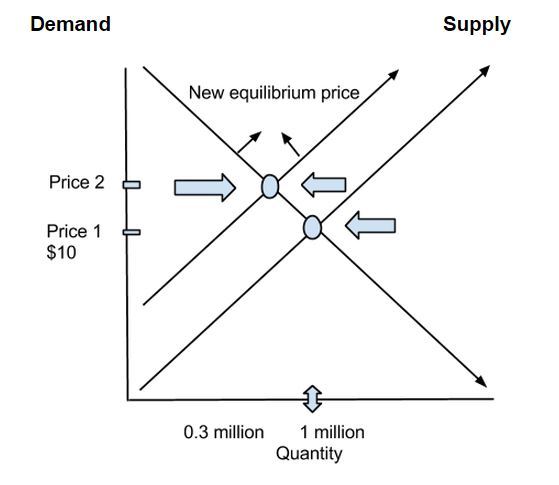 The long arrow line that go down show about Demand and the long arrow line that go up show about Supply. The product is talked about shoes first the shoes cost $10 then because of the company of the shoes have bad technology so it cause the supply to go down. Technology is one of the 5 shifters of supply too. Then when the technology go down it make supply go down because we produce less shoes. First we produce 1 million of shoes then when supply go down because of bad technology now we produce just 0.3 million of shoes. When the quantity go down and the price go up that is called inverse relationship because one go up and one go down.

Question: When we put Bacteria + Yeast + Sugar with warm water, does it do metabolism?

Hypothesis:
I think Yeast + Bacteria + sugar doesn’t make the balloon bigger because there are two things that like to eat sugar, so they have a competition to get sugar.

Experimental Group: Bacteria and yeast and sugar with warm water

If I do experiment again I will know more information because sometimes we do some wrong thing with yeast, bacteria. If it still the same information like last time our hypothesis is right because we know last time yeast+bacteria is make balloon grow bigger.

On October 5, 2014 all the students and the staffs at Liger went to the theater to watch the performance at the Diamond Island. At the theater they show about the story/history of the king 7. The performance when they showed was so good and all their action is they did it like the real story that had happened along time ago. The performer they did not perform just one character like when they perform one character finished they go to change the clothes and they did another character. About the story the first time in the kingdoms of the king 7 is very​​ prosperity but then Cambodia people they have the war with the Islamic people because they want to get the territory and the kingdoms. About the performance it looked really good for me and also for the other people too. When the performance finished all the audience was stand up and the loud noise of their clap was very loud and at the end has one performer had came to the site where the Liger students sit is and he said when he perform he was very proud of the sound that the audience clap and he also cry too because he very very proud of all the audience. He also said last time when he perform it have just 5-10 people that come and watch the show but these time it very different because it have many people that come and watch the show it like a hundreds and thousand of people so why all that thing make him cry because he was very proud of that. Also of the Liger students we when we go back to Liger we all said very thank you to all performer that they spend a lots of time for perform for us too because that was show respectful and also of Liger core value too. 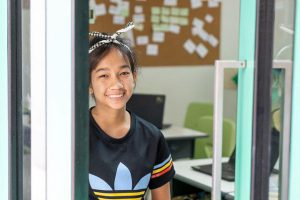 Liger Leadership Academy students are English Language Learners. They have been immersed in English for over five years but are still developing grammar and fluency. At Liger, we pride ourselves on prioritizing process over product. Please excuse any English errors as part of the learning continuum our students have taken over the years.